Fighting COVID-19: It’s time to break down the language barriers

COVID-19 represents Australia’s single biggest health crisis of the past 100 years. It has provided a myriad of complex, previously untested challenges for governments, businesses and communities to manage and negotiate. One of the most difficult challenges has been in communicating important, potentially life-saving information to a broad range of communities, each with their own needs and special challenges.

In this first in a series of articles on Humanities for Times of Crisis, we speak to Academy Fellow Ingrid Piller, Distinguished Professor of Applied Linguistics at Macquarie University, about the barriers facing multicultural Australia during COVID-19 and the role of humanities expertise in overcoming these challenges.

Communicating in Multicultural Australia during a Crisis

Most Australians take great pride in our multiculturalism. We often refer to ourselves as the most successful multicultural nation in the world, and with the latest Census (2016) showing that more than six million Australians were born overseas with nearly one in five (18%) arriving since the start of 2012, it’s difficult to argue that we’re not.

‘While we celebrate our diversity in many ways, including through music, dance, and food, we can often forget that Australia is home to many different languages’, said Professor Piller. ‘Failing to account for this diversity of language can create problems when there is an urgent need to share vital information across the nation’.

Around four per cent of the Australian population don’t speak English well or don’t speak it at all. While that seems a relatively small number as a percentage, it represents around 800,000 people. In the context of a pandemic, this represents a worrying number of people potentially missing out on crucial information. On top of that, around 14% of the Australian population – whether native or overseas-born – have low levels of literacy and may not be able to read texts that require more than elementary education.

How well prepared has Australia been for crisis communication, particularly with some of our most vulnerable people – those who speak little or no English and those who have low levels of literacy?

According to Professor Piller, Australia’s linguistic and communicative disaster preparedness has been lacking. Australia went into the crisis with a decidedly monolingual approach to public communication.

‘In the 1980s we were at the forefront of multicultural messaging,’ Professor Piller said. ‘It was a time when SBS was created and the national telephone interpreting service was set up. Australia had a national policy on languages, and governments wanted to ensure everyone in Australia had equitable access to information to create a cohesive society.’

In the lead-up to 2020, accessible communication was no longer seen as a national responsibility, but an individual responsibility and the focus shifted to individuals learning English. While learning English is undoubtedly important there is also the reality that adult language learning is highly complex. Learning a language in adulthood to such high levels to function well, even in a crisis, is a significant challenge, and not everyone is successful, despite being highly motivated and putting in their best efforts’

Quality communications is critical during any crisis.

‘The pandemic has been fast moving and the information flow needs to keep up. What we’ve needed has been timely, high-quality information tailored to meet the needs of our different communities. Sadly, this hasn’t always been happening.’

‘While it’s one thing to get the message out, even more important is to get that message right’ said Professor Piller.

‘In too many cases the translation of vital information from English to multiple other languages has been of low quality. A case of too little, too late. When that happens, people will lose confidence in the information they’re receiving.’

The majority of Australia’s migrant population live in cities, and cities are hotspots of multilingualism. Around 38% of Sydneysiders, for instance, speak a language other than English at home. In some suburbs of western Sydney this figure increases to around 80%. While the majority of these people are also very proficient in English, some are not, as mentioned above.

Given that the pandemic is largely a metropolitan disease, successful communication with these groups is essential to stop the spread.

Low levels of English language proficiency and literacy typically correlate with socioeconomic disadvantage, meaning those least able to process public health messages in English are often the most vulnerable during a pandemic.

Who takes the lead?

Professor Piller says there’s always a risk of too much information being shared in times of a crisis, which can lead to confusion.

‘In times of a national disaster on this scale it is always the government’s role to lead,’ she says. ‘All disaster preparation and response must be led by the state, including the creation and activation of an effective communications plan.

No-one is saying it’s the responsibility of the state to manage everything but they do need to have the strategies in place, and to activate sound and timely communications in all appropriate languages.

The need for communication volunteers

In times of other emergencies, especially natural disasters such as bushfires and cyclones, Australia’s volunteer community has always played a huge role.

‘What the pandemic has shown is that we need a volunteer force of multilingual talent who can be activated to support the government’s communication efforts in a time of crisis,’ Professor Piller said. ‘But we haven’t brought together our volunteer communicators and linguists to assist in getting the messaging and crucial information right’.

For any future pandemic we need to put plans in place to quickly activate our many language volunteers to help build community confidence by providing accurate, timely translations and interpreting.

It’s not too late to act

While Australia is still dealing with lockdowns, restrictions, and border closures, Professor Piller believes we’ve learnt enough during the first six months of the pandemic to begin putting strategies in place to help break down the language barriers which have frustrated our response to date.

‘In the past, the linguistic disadvantage of minority communities could be ignored by the mainstream. The COVID-19 crisis has changed that,’ Professor Piller said.

One of the many lessons we need to learn from this crisis is to include the reality of Australia’s language diversity into our normal procedures and processes, including disaster preparation and response. And to save lives, that action needs to start now. 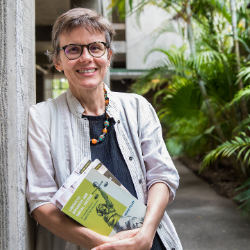 Ingrid Piller FAHA hosts a series on language challenges of the COVID-19 pandemic on the sociolinguistics portal Language on the Move and, together with colleagues from China has just edited a special issue of the international sociolinguistics journal Multilingua devoted to “Linguistic diversity in a time of crisis”. Ingrid was elected to the Australian Academy of the Humanities in 2017 in recognition of her distinguished contribution to intercultural communication, language learning, multilingualism, and bilingual education.

About Humanities For Times of Crisis series

This is the first in a series of articles – Humanities For Times of Crisis – lead by the Academy with leading humanities experts that aim to shine a light on critical issues; to demonstrate how Australian humanities researchers have been contributing to understanding the impacts of COVID-19 and its aftermath; lessons learned from 2020; and how Australia might do things better.