We spoke with Professor Nick Evans, an Australian linguist and leading expert on endangered languages based at the Australian National University, about the many challenges facing Indigenous Australians during the 2020 coronavirus health emergency. While many of these challenges began to be understood and addressed last year at the height of the crisis, it is essential that we keep them firmly in view and continue to build our capacity to communicate well-tuned messages about health now and into the future.

The Australian Academy of Humanities recognises the First Nations People as the original occupants of our land, and strongly supports the Reconciliation Week theme for 2021: ‘More than a word. Reconciliation takes action.’

The Academy also recognises that reconciliation is a journey for all Australians, and at the beginning of this Reconciliation Week we pledge our commitment to contribute to national efforts to acknowledge Aboriginal and Torres Strait Islander cultures, histories, knowledges and practices as foundational to our national story, and recognise the role and contribution of Indigenous researchers and knowledge custodians.

Indigenous Australia in a Crisis

The disadvantage facing Australia’s First People is well documented. Aboriginal and Torres Strait Islanders live shorter lives, and struggle with higher rates of incarceration, unemployment, suicide and mental and general health problems. Successive governments have worked tirelessly to Close the Gap. But that ‘Gap’ remains one of our nation’s biggest challenges of the 21st century.

The arrival of COVID-19 in January 2020 sent shockwaves through the nation and for the first time in a century Australia was dealing with the beginnings of a pandemic which in other parts of the world was spreading like wildfire.

Indigenous Australians were quickly identified as one of our most vulnerable groups. While relatively small in number, Aboriginal people – in remote and urban communities – have underlying challenges of poor health and poverty which puts them at greater risk of contracting highly infectious diseases.

Just as the rest of Australia was being warned of the risk of COVID-19 spreading, Indigenous Australia was put on notice of the inherent risks facing individuals – especially amongst the elderly – and in isolated communities.

The decision to effectively close, thereby isolating remote communities, has been successful to date in preventing the disease infiltrating, potentially with devastating effect. To date, we have averted similar rates of deaths as from the Spanish Flu 100 years ago when 30% of lives lost in Queensland were Aboriginal, and where in one community alone, Cherbourg, 596 people became infected from a community of 606. Of these, 87 died and were buried in a mass grave.

Spreading the word, not the disease

According to Prof Nick Evans, some of the success in preventing the pandemic taking hold amongst our Aboriginal communities can be attributed to the sharing of life-saving messages. Although it hasn’t all been plain sailing.

‘Everyone becomes a little sceptical in times like this. In life and death situations, we all prefer to listen to someone we trust, and this is particularly so amongst Australia’s Indigenous populations. When there is a tradition of listening to elders, it will always be best to receive information from that most trusted source. And while non-Indigenous people get much of their information in written form, people living in Aboriginal communities often respond best to the spoken word,’ Prof Evans said.

‘While the health messages are absolutely critical, they also have to be culturally appropriate and delivered by the right people.’

Ensuring the wellbeing of Indigenous Australian communities requires ongoing education and new ways of talking about the disease, and in First Nations’ languages.

COVID-19 has exposed many weaknesses in Australia’s ability to respond to a fast-moving health emergency, and none more so than within our Indigenous communities.

By June 2020, Indigenous community members, academics and language researchers had rushed to translate crucial COVID-19 health messaging into 29 Australian Indigenous languages. However, that left many languages still to be translated, meaning entire communities were placed at even greater risk.

In his letter to Federal Minister for Indigenous Australians, Ken Wyatt, and Health Minister, Greg Hunt, on behalf of 98 language researchers, Prof Evans said many living in remote communities were ‘more fluent in one or more Indigenous languages than they are in English, struggling to make sense of health information presented in English.’

The letter goes on to highlight a number of other serious challenges in getting good quality information in local languages to communities at highest risk from the pandemic’s spread.

‘While many projects to translate posters and provide audio recordings in Indigenous languages have begun…their effectiveness is potentially hampered by a lack of coordination. The rapidly changing messaging across state/territory borders due to the fluid nature of the crisis also risks materials being produced without opportunity for quality processes and careful checking to be followed.’

In his letter to government, Prof Evans says COVID has demonstrated the urgent need for action through ‘…a significant and national-level push to co-ordinate, build capacity and establish best-practice guidelines for messaging for Indigenous groups, including in Indigenous languages…’

On the ground, Prof Evans says when communicating with our First Nation’s communities ‘we shouldn’t just be thinking about the written medium.’

‘Aboriginal people may not necessarily be literate in their own language. The written word is very new in many of these remote communities and among different languages. It’s important to share as much information as possible through oral communications, and increasingly through social media such as Facebook.

‘Making a good translation, hard as it is, is just the first step. Even more important is how that message is then interpreted by the person receiving it.

‘Many Aboriginal people are highly multi-lingual. The big challenge to getting successful communication is unpacking all the taken-for-granted concepts and presuppositions behind the message. Telling people to keep 1.5 metres apart will not be clear or effective in all Indigenous communities, whereas other wordings that have been proposed – such as building on traditional words for physically distancing out of respect for certain in-laws, like the Dalabon word kurruhmû ‘keep physical distance out of respect for certain in-laws such as mother-in-law, go around or keep away from someone in an in-law relationship’ – can be more immediately understood.  Or if we translate ‘don’t touch your nose or mouth’ and the words for ‘nose’ and ‘face’ are the same, how do we make sure we are precise about what shouldn’t be touched by the person receiving that message.

‘It is so important that people understand the nuances behind such a message. And, because of how mainstream Australia operates, where monolinguals tend to underestimate the complexities of translation, it’s sometimes assumed you can just feed the words into Google Translate. It just doesn’t work that way when you’re dealing with Indigenous languages with their very different conceptual structures.’

Similar problems arise when sharing messages about ‘social distancing’ for communities who live their lives close together in large family groups, and often in crowded accommodation. There’s no point telling people to do things which just aren’t possible in their life situations.

Prof Evans says the problems for Indigenous communities in remote and urban settings have many similarities, despite the great differences in lifestyles.

‘And again, who, who delivers the message, and how, is all important. Once more, we need Aboriginal voices to ensure the message is both heard and understood.’

‘It presents a tricky cultural difference in that Aboriginal people often want to build a certain level of trust with the person they’re talking to rather than just making a cold call. It’s important to consider how easily people living in these isolated communities might find it talking to a total stranger.

‘In mainstream, western situations, we do this often, but we shouldn’t just plonk someone into this situation, dealing with highly complex and sensitive health issues, with little or no cultural awareness. We need to be in the shoes of who we’re talking to. For instance, it’s important that health communicators don’t use people’s names willy-nilly. This isn’t the way Aboriginal people communicate and can cause embarrassment or distress if done inappropriately.

‘Anyone involved in Telehealth should receive cultural training as a matter of course. This isn’t a luxury, it’s a must. In communicating with Aboriginal communities there must be a culturally sensitive approach.’

Prof Evans says the Indigenous media (NITV, SBS, Koori Mail) is one of the first places many Aboriginal people will go for their information.

‘Yet again, this is about a trusted source. These are Aboriginal voices, sometimes speaking in Aboriginal language. Using the Indigenous media to send important messages helps solve many communications problems.

Prof Evans says he is ‘puzzled’ that governments haven’t put greater emphasis on increased funding for trusted information sources like Australia’s Indigenous media and the ABC who are best able to reach communities in even the most remote parts of the nation.

Prof Evans has joined with others from the ARC Centre of Excellence for the Dynamics of Language in calling for a new national approach for ‘the provision of clear, accurate and timely information, in local languages, that recognises the intersection of culture with public health imperatives.’

If Australia learns anything from COVID-19, Prof Evans hopes it will demonstrate ‘the need for capacity building by establishing a first-rate national system for the coordination of timely information-sharing into remote communities in an understandable form, including in Indigenous languages.’

Professor Nick Evans is a leading Australian linguist and an expert on endangered languages. He holds a PhD in Linguistics from the ANU, where he is Distinguished Professor in the School of Culture. Prof Evans is also the Director of the ARC Centre of Excellence for the Dynamics of Language. 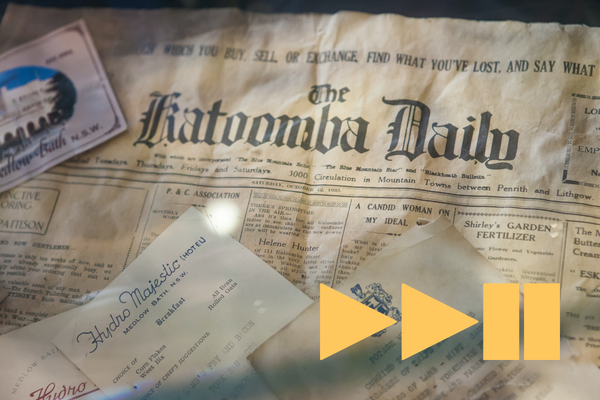